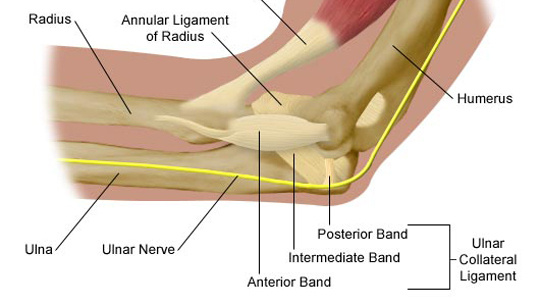 Tommy John Surgery, known medically as ulnar collateral ligament reconstruction, involves taking a tendon from a patient’s wrist, forearm, hamstring, foot, or even from their toe, and using it to replace a torn ligament in their elbow. The procedure is named after Thomas Edward John Jr., a former Major League Baseball pitcher, who first underwent surgery in 1974 to repair a ligament in his pitching arm. John would go on to win another 164 games in his career following his then-revolutionary surgery.

The surgery itself lasts anywhere from 60 to 90 minutes, but the recovery time may take up to a year. Dr. Frank Jobe, the surgeon who performed Tommy John’s initial surgery, only gave him a 1 in 100 chance of ever being able to pitch again, but as of today, 85% of patients are able to return to their respective sports with little to no difference in performance.

Once the graft tendon is extracted, surgeons drill tunnels in the ulna and the humerous (above and below the elbow). To reconstruct the damaged ligament, the graft is threaded through these tunnels and tied in a figure-eight fashion. The remaining remnants of the original ligament are attached to the tendon to add strength.

The surgery is not the first choice for most patients as it is only considered after the patient either fails to respond to non-surgical treatments (such as physical therapy) or if they want to resume strenuous activities, such as overhead throwing, that require full range of motion.

Recovery after surgery happens in three stages. The first involves splinting the elbow for 7-10 days post-operation to limit mobility. Gentle range of motion exercises are recommended for the wrist, shoulder, and hand to maintain strength.

Elbow strengthening exercises aren’t recommending until six weeks after surgery. For four or more months, depending on the patient, any activity over-stressing the graft are off limits. Baseball pitchers typically are not allowed back on the practice field until 7 months after their surgery, and they usually do not return to the game until 9 or more months have passed.